Book Publishing Secrets with David Schaub, Co-Author of SPIRITS OF THE WESTERN WILD

David Schaub is a writer and Academy Award ® nominated Animation Supervisor working in the film industry for more than 25 years. In 2019 he produced and directed the audio adaptation of SPIRITS OF THE WESTERN WILD.  He also developed STORY COMPASS® smartphone app for screenwriters (www.moviemethods.com) in 2017.

Schaub received Oscar nomination for animation in Tim Burton’s ALICE IN WONDERLAND (Disney), along with nominations for BAFTA Award, Saturn Award and Critic’s Choice Award, and won the Golden Satellite Award for Best Visual Effects for his team’s work on the film. 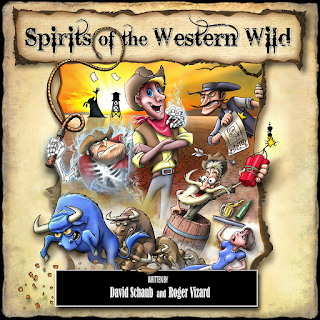 This mystical adventure follows a young adventure-seeker named Luther McCleron on a westward journey to learn more about his Grandfather. A series of fateful missteps take Luther far from his destination to a disheveled little town under the tyranny of a crooked sheriff named Big Willie. It’s here that Luther comes face-to-face with the legendary ghost of Monty: a curmudgeonly ghost who refuses to believe he’s dead. Luther just wants to get back to his quest, but Monty thwarts his plans by using Luther to take out his vengeance on Big Willie.

Through a catastrophic string of events, Luther and Monty find themselves hopelessly entangled in a combative partnership that escalates to the breaking point. Only by reconciling their differences are they able to uncover the profound connections that weave their fates together.

A mysterious book of premonitions, an ominous crow, and ancient Indian drive the mystical tone of this world; conjuring spiritual forces to help steer Luther on his journey through this western “twilight zone.”

All the loose ends resolve in a satisfying story of redemption, loyalty and ascension while exploring the mysterious nature of fate and destiny. Was all of this a coincidence? Or are we guided by ancient “spirits on the wind” that nudge and steer us along our path to assure that we arrive safely at our intended destination in the end?


5 out of 5 stars
A fantastic and Immersive adventure for everyone.
What a wonderful audio book and what a pleasure it was to be on this journey. Not only the adventure was captivating but also everything around it. The sounds effect and voices really bring it all together, you almost feel like you are right there witnessing all this first hand. The production quality is something I have never heard before. Very well done and I highly recommend it.


Thank you for your time in answering our questions about getting published.  Let’s begin by having you explain to us why you decided to become an author and pen this book?

Schaub:  SPIRITS OF THE WESTERN WILD was written as a screenplay for an animated feature. It was Roger [Vizard], my story partner who originally pitched me the idea for a buddy film with a young cowboy and a crotchety old ghost who refused to believe he was dead.  It was mostly a character premise with some great drawings and situational gags. We kicked ideas around between ourselves about where the story could go, and ultimately decided to join forces to see if we could shape it into a fully executed screenplay that would sustain itself as an animated feature.  It was the characters that inspired us, and that’s what drove everything down the story path.
I guess you can say the drawings were the catalyst that sparked the ideas we needed to shape the story, which evolved over several years.  Keep in mind that both of us are still active in production, so this is a pet project that we worked on during our rare bursts of downtime.

Is this your first book?

Schaub:  Yes – our first rodeo – in this medium.

With this particular book, how did you publish – traditional, small press, Indie, etc. – and why did you choose this method?

Schaub:  The official release of this project is an audio drama (Audible), together with an illustrated Kindle release (Amazon), all self-published. Traditional publishing was not an option for us since our ultimate goal is to make the film - and of course, we need to retain the rights to do so.

As a screenplay, this title was destined to make its rounds through the Hollywood studio circuit, as is customary for these things. The audio drama is just a new angle for us to get this out to a real audience and collect organic reviews.  Basically, we are pursuing our own groundswell that will work in our favor when circling back through the studio system later. It’s a non-traditional approach for sure, but proving to be well worth the effort.

Can you tell us a little about your publishing journey?

Schaub:  Once the screenplay was complete, we found ourselves sitting on a precious pound-of-paper (1.25 lbs to be exact).  Having drudged through hundreds of screenplays myself over the years, I fully acknowledge what a chore it can be for anyone to commit to actually READING these things (without it becoming a huge favor by the designated reader to do so…).

When Roger moved onto another animation gig, I decided to keep chipping away at the next steps toward production.  I had the wacky idea of producing it as an audiobook to make it super-easy for studio execs to absorb on their commute.  No reading required -- just straight-up entertainment for the listener.

Self-funding the film wasn’t an option, but since I was looking for something to direct, I figured I could certainly produce an audio drama!  It was also an opportunity to demonstrate my directing chops with actors, bringing it to life in a way that the written page alone could never achieve.  Call it a “movie for your ears.”  The task was more than I bargained for, but I’m happy to say that the movie is all there… minus the visuals  ;-)

After the audio was complete, I was informed by Amazon that a print (or Kindle) version had to be released before the audio version could be approved.  So that put me into another tailspin…

Unfortunately, Kindle doesn’t offer a solution to display screenplays in their native format, which is a strict standard by industry definition.  But after many trials and tribulations, I came up with a formatting solution that seems to work pretty well.

Now that the Kindle version is out there, I’m happy that it is.  Not only can you follow along with the audio version, but you also get a first-hand account of how the audio adaptation evolved from the written screenplay.  It’s also a convenient way to share artwork that Roger and I have collaborated on throughout this process.

With the audiobook available now, the film should play out clearly and precisely between your ears - as intended - from our brains to yours.  And hopefully, it’s a much tastier alternative to digesting a pound of paper!

What lessons do you feel you learned about your particular publishing journey and about the publishing industry as a whole?

Schaub:  We launched into this project under the premise that content is king, and the fact that studios are ravenously hungry for content. That notion was a motivating force, in addition to our desire to create a project that we could shepherd through to the end.

But with all the self-publishing going on these days, I was a little surprised at how much content is actually out there!  I wasn’t following the eBook and audiobook industry and just coming at this from a screenwriting perspective. But now that we are entering that market – it’s a little overwhelming how deep the water is out there!

That’s why it’s great to be on the PUYB Virtual Book Tour.  I’m enjoying the process of contributing to the various blogs and doing interviews like these.  It’s been a cathartic experience, reflecting on the process, and sharing lessons learned along the way.  It’s definitely a great way to get the word out through different sources to raise awareness – rather than having the script sit unread on a gatekeeper’s desk somewhere.

Since we decided to go the publishing route late in the game, we really hadn’t planned for an appropriate marketing strategy tailored to this industry. And as you can imagine – to be effective - those efforts should be started much earlier.

Would you recommend this method of publishing to other authors?

Schaub:  It is a little too soon to tell.  It is definitely a strategy I haven’t seen before; that is, an audio adaptation of a screenplay designed to circumvent the traditional route through the Hollywood system.  The response has been great so far, so we’ll see how this all plays out. Reviews are coming in, and we’d love to keep them coming!

** With that in mind ** we still have promo codes available (US & UK) for anyone interested in a free copy in exchange for an honest review on Audible.com  ;-)

Feel free to reach me directly here, while codes are still available:  dschaub2@gmail.com

Here are the reviews so far:  https://tinyurl.com/audible-us

We’d love to have new listeners chime in, and get behind us on this journey!

What’s the best advice you can give to aspiring authors?

Schaub:  I’d say it’s a good idea to take a step back and make sure your expectations are realistic.  As noted earlier, we really didn’t know what to expect, going in. If you think writing is a challenge, wait until you get to the marketing part!

I think that social media offers enormous opportunities for authors, and I realize we should have jumped on the social media bandwagon much sooner.  You certainly don’t need to wait until your book is done to start your promotional push. If you can build anticipation for an upcoming release, then it is a simple matter of unleashing your finished product onto your loyal band of followers. They will happily devour what they have been eagerly anticipating.

In our case, we are catching up now.  I started an Instagram feed to document the journey from writing to recording… and kicking the can down the road toward our goal of producing the animated feature at some point:
https://www.instagram.com/moviemethods/

I thought it would be entertaining to post the twists, turns, and writing inspiration as we go. I’m sure there will be lots of discoveries, insights, and takeaways on the bumpy road ahead.   So please FOLLOW, and share the adventure with us. It’ll be a fun ride, for sure!

Book Publishing Secrets at 12:00 AM No comments: