Book Publishing Secrets Behind The Peruke Maker by Ruby Dominguez 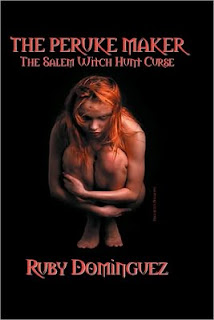 Driven by a mystical dream I had after trying on a 100% hand-tied human hair wig that I purchased online as described to be harvested from a reliable and youthful donor.

I woke-up from the dream in shivers, seemingly reliving a dark history of a young woman’s horrifying fate named Bridget and her father’s (The Peruke Maker) vindictive quest for justice beyond the grave.

Eerily, I believed that in Salem, Massachusettes from three centuries ago, the Peruke Maker’s Shop lay hidden behind a forgotten and abandoned room of an old crematorium built-up with dust and cobwebs with a finished white wig still sits by the boarded up window to this day.

Wefts of yak, goat, horse and human hair, fishhook-like needles, pomade, powder and a wooden head are laid down on a work table wherein a pair of rusty scissors, entwined with strands of Bridget’s red hair eerily rests by the wall mirror.

So, I have decided to travel to Salem, Massachusettes on a book tour this October 2009 and investigate the existence of the Peruke Maker’s Shop, and to retrace the agonizing ordeal of his daughter, Bridget in Gallows Hill.

THE PERUKE MAKER – The Salem Witch Hunt Curse, is my first published book written as a screenplay.

It was my initial intention and still is, that it becomes a Halloween blockbuster movie.

In the meantime to generate a buzz, I opted for self-publishing/vanity press for immediate distribution to the e-world.

It didn’t take me long to discover Outskirts Press via internet and then submitted my manuscript for their consideration and acceptance.

And now my book is available in 25,000 internet stores around the world.

A highly professional publisher, who holds your hand every step of the way down the road to success!

Outskirts Press services offers me a variety of marketing options inclusive of a PR Marketing Assistant/Leah Zions and a PR Publicist.

It took me 1 year of dreaming about it, 1 year of research work, 4 weeks to put down into written words, and another 2 years to crystallize the story.

Submitted it to Lejen Literary Consultant – Lee Levinson for a script coverage analysis and after 2 months received it back with a good review.

Words of inspiration to other writers:

When all things fail, let your passion be your retirement plan.

As writers we are very fortunate to be living in an electronic world wherein there are no boundaries for success! Virtual book tours are testaments to sayings like, “What a small world

What’s next for Ruby Dominguez?

I shall be promoting my second and third publshed book titled, ROMANCING THE CLADDAGH – The Curse of Macha (horror/romance) and IT’S OVER MICHAEL, But….(romance/comedy) and in between writing my fourth book, THE RED DRAGON’S TRIANGLE – Boudicca’s Curse (mystery/horror).

The author, Ruby Dominguez is challenged by the conflicting complexities of the past and future. Undeterred, she strokes with pen the somber and bright hues of her visions. She currently resides in San Francisco and works in the field of property management/leasing. She has been a recipient of the “Editor’s Choice Award,” by the National Library of Poetry in 1999 and 2007 for her published poems in the SHELTER OF SHADE. Visit her website at: www.outskirtspress.com/theperukemaker, www.facebook.com/theperukemaker and blog at www.salemcurse.wordpress.com.